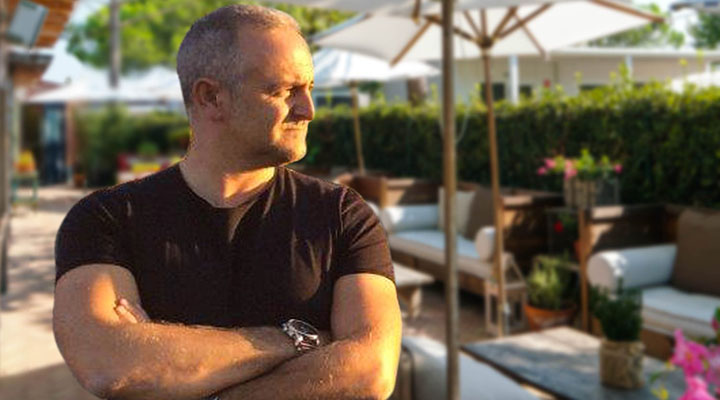 Claudio deals with the security at Union Lido since he was a kid: he used to keep an eye on the valuable items in the shop of his family, which opened 1956, exactly the one you can still find along our Shopping Center: the Murano glass shop. Claudio was anyway there when he was a baby: his crib used to stand in the middle of the glass sculptures!

He spent his summers by playing along the campsite’s streets and helped his parents in the shop. When he grew up, he worked as a lifeguard on the beach and took care of the Guests’ safety. What a coincidence!
He served in the military Corps of Carabinieri; soon after he decided to complete his studies and graduate as soon as possible. He searched for a job that could support him and Union Lido gave him the chance to work for the night security: the perfect workplace to have time enough to study and take exams during the day.

Let’s sum up all his roles so far:
– Family’s shop security
– Lifeguard on the beach
– Carabiniere
– Night porter

Raise your hand if you’d feel safe by his side!

He soon became Architect and was offered the opportunity to work for the Union Lido Technical Office. He gave his best for his job, in fact – after more than 20 years – he is still working for the same office: he is known for being our Chief Technical Officer.

In this role, needless to say, the employees’ and guests’ safety is one of the main issue.

We can really say that Claudio’s life at Union Lido is a life entirely dedicated to safety!

We would like to tell you one last secret: if you don’t know Claudio already, we invite you to live an authentic experience with him, which will give you an extraordinary impression: enjoy watching his beloved team – Inter, playing soccer! Only in this occasion – especially if the result is bad for his favourite team – you probably won’t feel safe at all!

“Union Lido gave me the chance to learn so much, even more than I ever learned from books”
Cit. Claudio Zanetti

How can we help you?