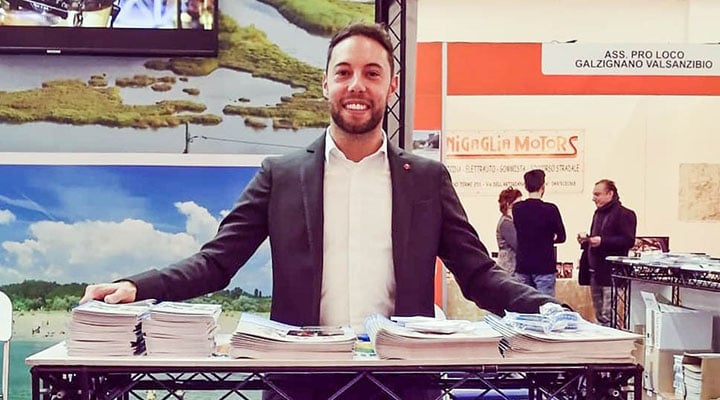 Working at Union Lido is for Esli like being seated on a swing ride and every new summer season may be considered as “another round, another race”!

Many of you recognize him as the elegant and nice receptionist of our hotel. From 2007 – the year of his first job – until today, how many roles did he have at Union Lido?

He started selling ice-creams at the Bar Mini Golf and learned over the seasons how to properly work behind the counter of a bar: he was a barman, waiter, and cashier at the same time. Customers thought they had drunk too much Spritz because all of a sudden they saw him working somewhere else! Esli, after his working hours at the bar, did not use to go home: he simply took off his uniform as a barman and wore the Photo for You shop’s one – the shop just on the opposite side of the street.

Is a double shift enough? Probably yes, but Esli thought his day had been too calm and easy, so he spent some more hours as a barman at the Piña Colada (which at the time was called “Empire”) and prepared tasty cocktails for his guests: Esli Stakanov!

Because of his experience as a barman, he had been offered to work the hotel bar – no need to say he immediately said yes: 2014 he takes the ticket for a new ride on the swing carousel – this time however with the Union Lido uniform. Behind the counter Esli gets well along and shows an important quality: he is an excellent communicator and shows great affection for Union Lido. Summing things up, it is quite easy to think that he would be an excellent ambassador of our campsite at fairs around Europe. And there he is: Stuttgart, Munich, Utrecht, Nuremberg. At the Union Lido stand you can be welcomed by his smile!

The Human Resources Office begins to echo a question: if Esli works well behind the counter of a bar, behind the stand at the fair…will he be good enough behind the reception desk? The answer is ready: after 4 years working at the hotel, during this winter he signed his contract with Union Lido for a permanent position! However, this is only another round on the swing ride!