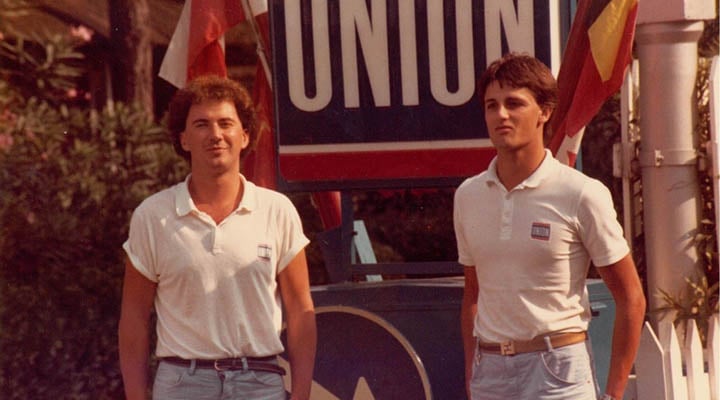 GIULIANO CASTELLI: A history book.
It is difficult to describe Giuliano in a few lines only, are you sure you want to know his story? Alright, take a break for yourself: Giuliano’s story follows Union Lido’s life, and each chapter of his book opens one of yours.
1975 he starts working when he was only 15. His life, like a real Oscar film, begins – exactly like the one Fellini won the same summer with “Amarcord”. The clearest memory he mentions about that summer is Tarcisio working at reception and giving him orders, with Mr Neumann watching the both of them. If you know who we are talking about, yes, it means you have been coming to Union Lido for many, many years!
1979 he carries out his military service in the Navy: from that moment on, easy to recognize him tanned and in his white uniform. After all, if you enter Camping Italy today, you will find him like this: tanned and in his white uniform…with less hair maybe!
He carries on with his studies and passion in computer science and programming (we will tell you more later because of some incredible historical coincidences). Giuliano returns to Union Lido in 1981: after the summer season, he is offered to work also during winter. Between Giuliano and Union Lido starts this way a real “marriage”, which is even clouds Prince Charles’ and Lady Diana’s one which happened the same summer.
He covers any role: maintenance, night security, hotel receptionist, booking office and, ten years after these many roles, Director Armando Ballarin (raise your hand if you remember him) wants him to become Camping Italy’s Director. 1986 Camping Italy joined Union Lido.
1991 Giuliano is only 30 years old: while CBS is broadcasting throughout the United States the last episode of Dallas, in Cavallino starts the first episode of a series which 2021 still sees no end: Giuliano, Camping Italy’s Director.
As mentioned, Giuliano is like a book of memories: his stories are so clear that we can almost imagine every single moment. If you are curious, ask him about the 1979 strike, the mucilage season, or the joke “red light” that his colleagues played on him during the fair: his stories will not disappoint your expectations!
We can’t tell you everything, as we already said it is highly impossible to describe his whole life in a few lines only. However, we are quite sure that in the comments below you will give us hints to enrich Giuliano’s story.
Sorry, we were almost forgetting to tell you the coincidences between Giuliano’s IT interests and the events in computer science: 1975, Giuliano started working and at the same time Bill Gates was creating Microsoft; 1981 he returned to Union Lido and while the IBM was selling the first Personal Computer; during summer 1991, when he became Camping Italy’s Director, the World Wide Web was born.
“I have been working for more than 40 years in this company and I feel part of it. I still don’t feel the desire to leave: it is not time to go yet, I am still enjoying being here”

How can we help you?