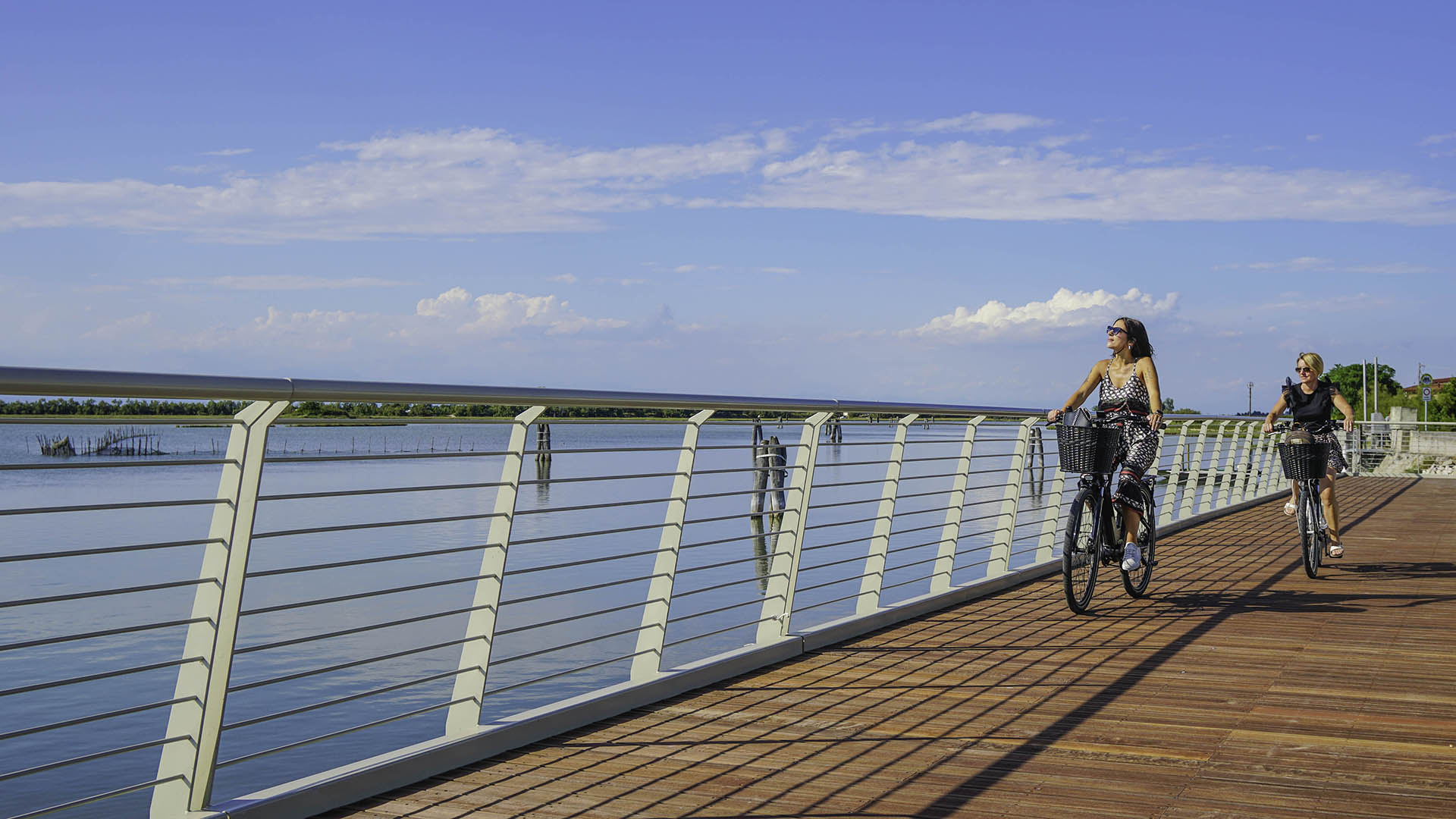 “Cavallino Amazing Peninsula”: a land suspended between the sea and Venice’s Lagoon, with landscapes like no other in the world, characterized by “Barene” (stretches of saltwater), “Ghebi” and marvelous sandy shores, whose limpid waters are awarded since ten years with a prestigious environmental recognition, the Blue Flag.

In the hinterland pinewoods and natural reserves, fortifications and remains of the glorious Venetian past are mixed to vegetable gardens and campsites, in an extraordinary union.

The name Cavallino derives from the ancient toponym “Equilium”, a remote land known for the breeding of the horses for the Roman Empire, the ruins of which it is still possible to observe in Lio Piccolos rustic villas and mosaics.
Later on, during the dark ages, this part of the lagoon saw the rise of important centers like Torcello, Ammiana and Costanziaco.

Today, many water streams cross the peninsula, among others the river Sile, separating Cavallino from Jesolo, and from the canals Pordelio, Saccagnana, and Portosecco.

This beautiful territory can be fully appreciated travelling by bicycle, on the numerous bicycle paths that run all over the 15 kilometers of the coast.

Cavallino Treporti offers a huge variety of restaurants, where it is possible to enjoy the specialties that make its gastronomy famous in Europe; country fairs and events like the Beach on Fire (a beautiful pyrotechnic show that involves the whole coast) contribute to color the calendar with numerous events.

The coast is a privileged starting point for the excursions heading to Venice and the islands of the lagoon, like Burano (famous for its laces and the colorful architectures) Murano (for the production of blown glass), Torcello and San Francesco del Deserto.

Things to visit in Cavallino-Treporti: 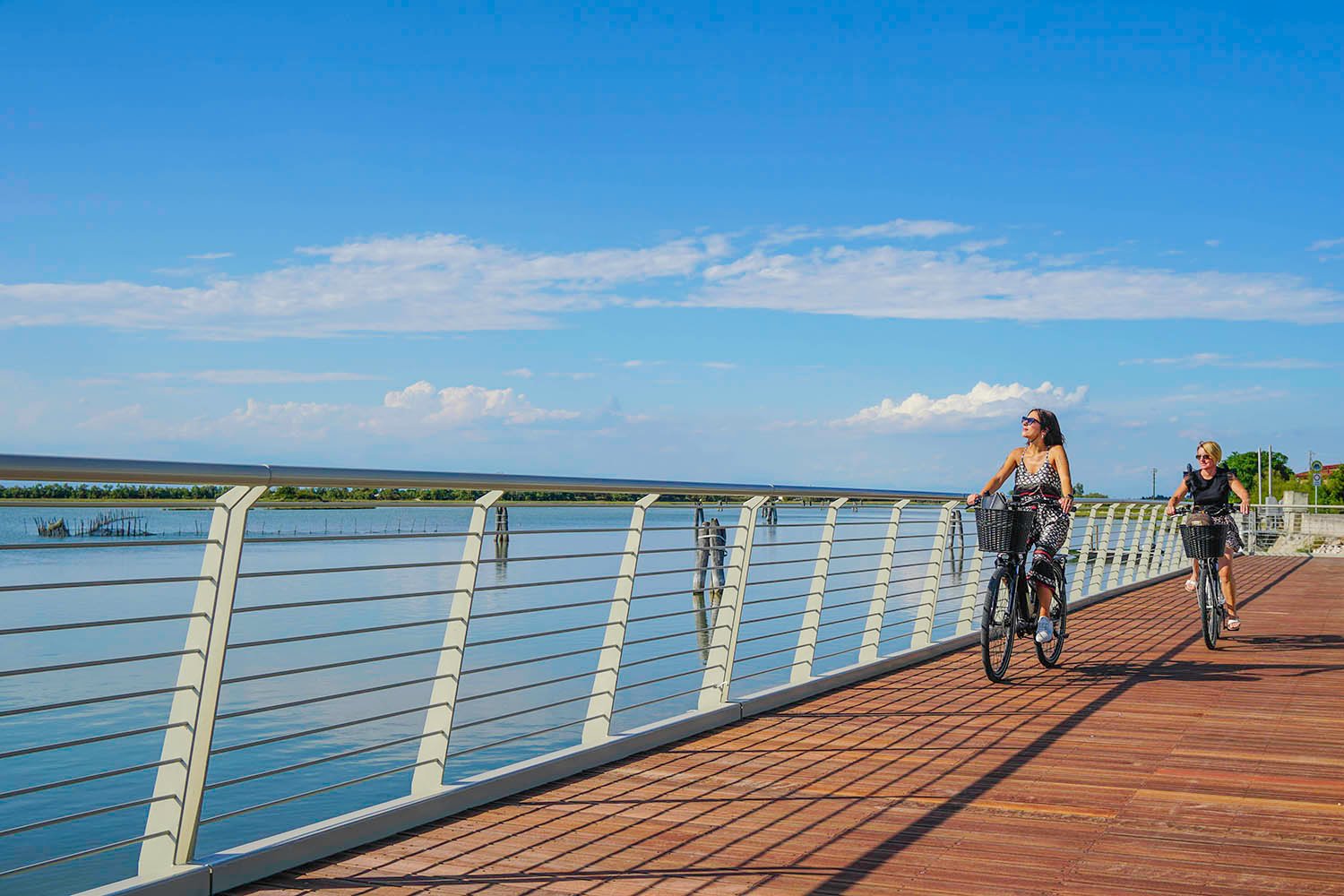 PEDESTRIAN AND BIKE LANE VIA PORDELIO

Pedestrian and bike lane with view of the Venetian lagoon, one of Europe’s longest yet (7 kilometres long, 5 of which run over the water). The first kilometre is already open! 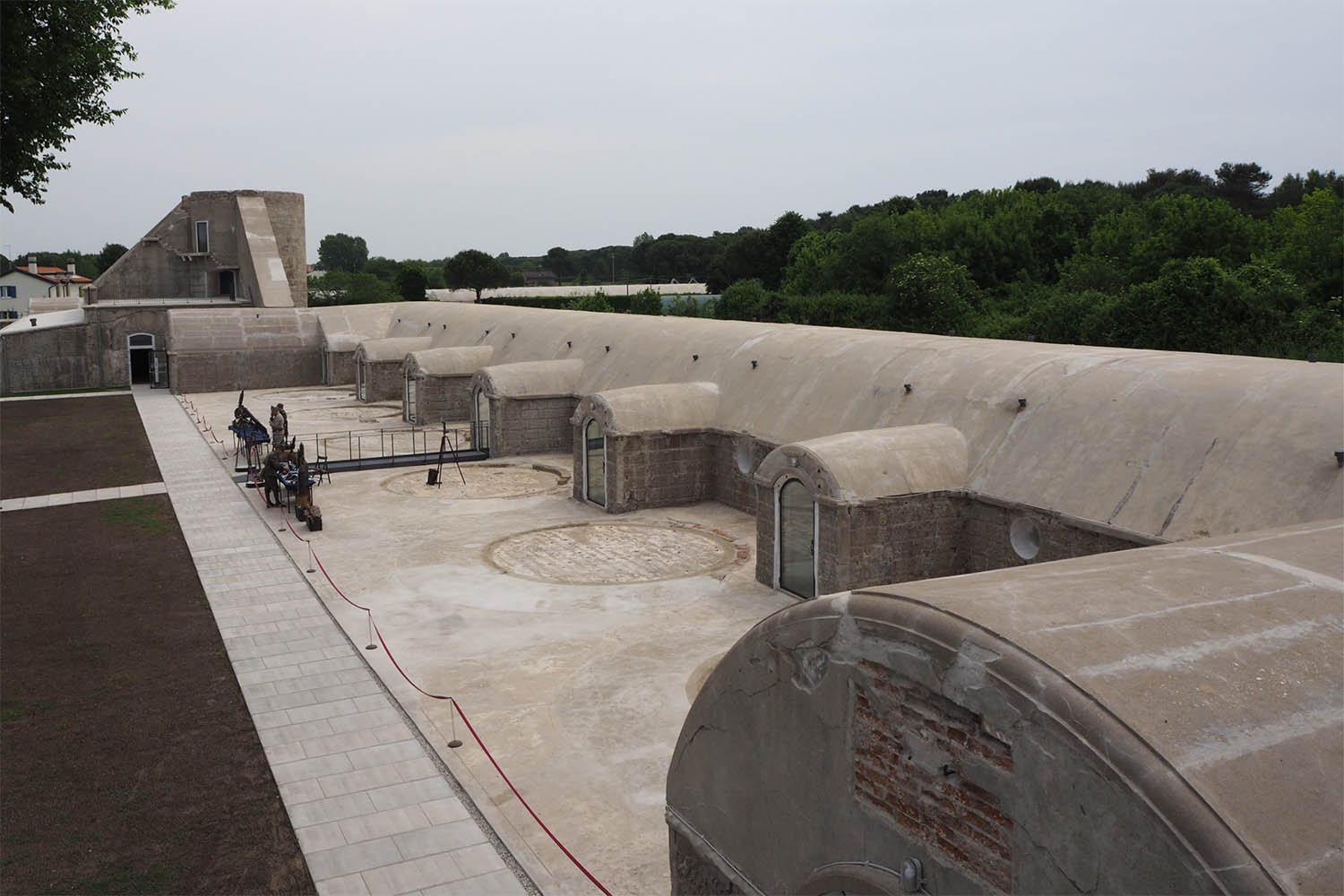 Built between 1909 and 1912, during the Great War Battery Pisani was equipped with six howitzers and controlled by a company of the 1st Artillery Regiment from Fortress of the Royal Army. Entirely restored, it is now used as an exhibition space open to public. 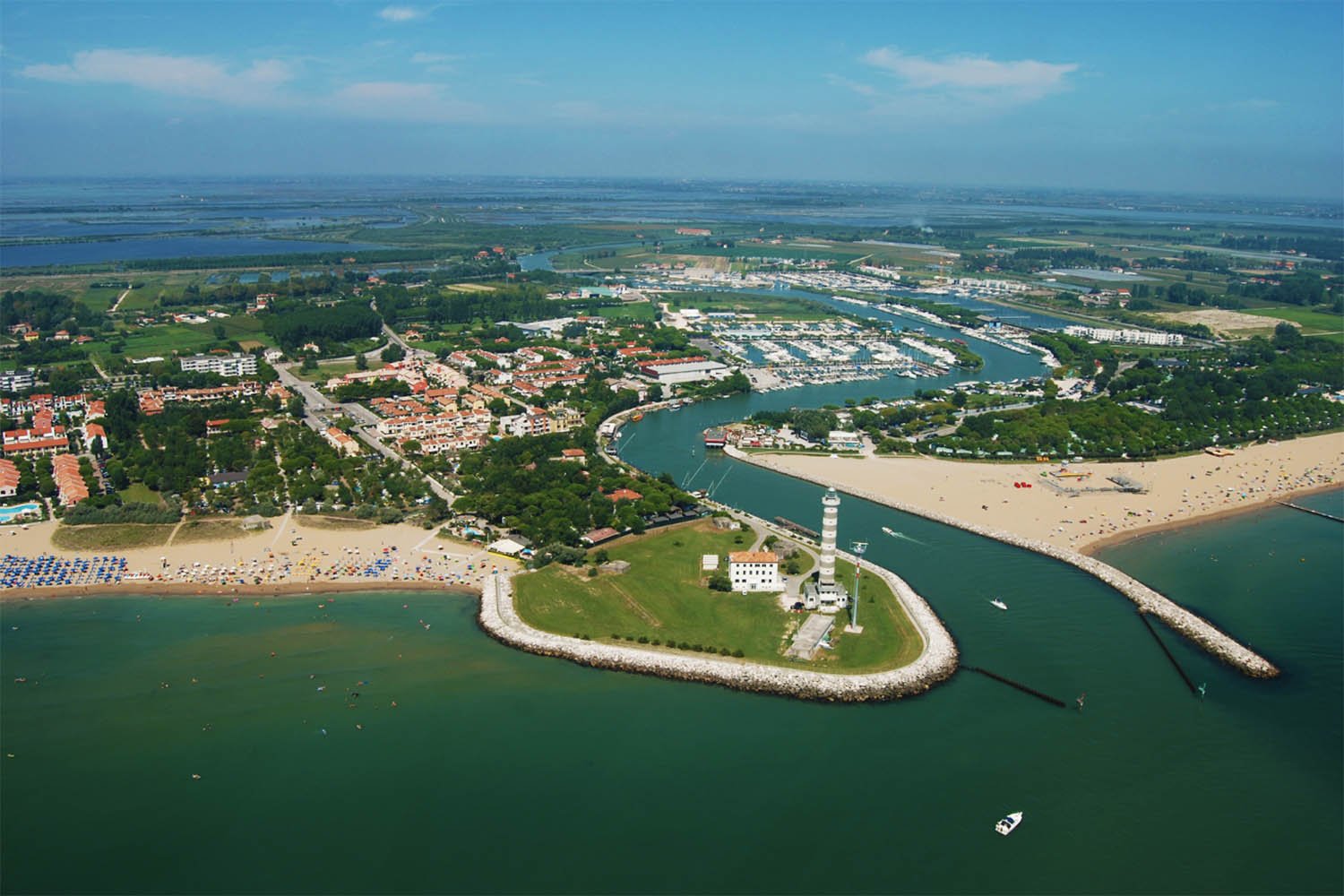 Also known as “The Old Piave’s Lighthouse”, it is located at the mouth of the river Sile in Cavallino, and was built for military purposes (transiting ship sighting) in 1846 by the orders of the Austrian government. Destroyed in 1944, it has been rebuilt between 1949 and 1951, and at the time it hosts the offices of the local portal captaincy. 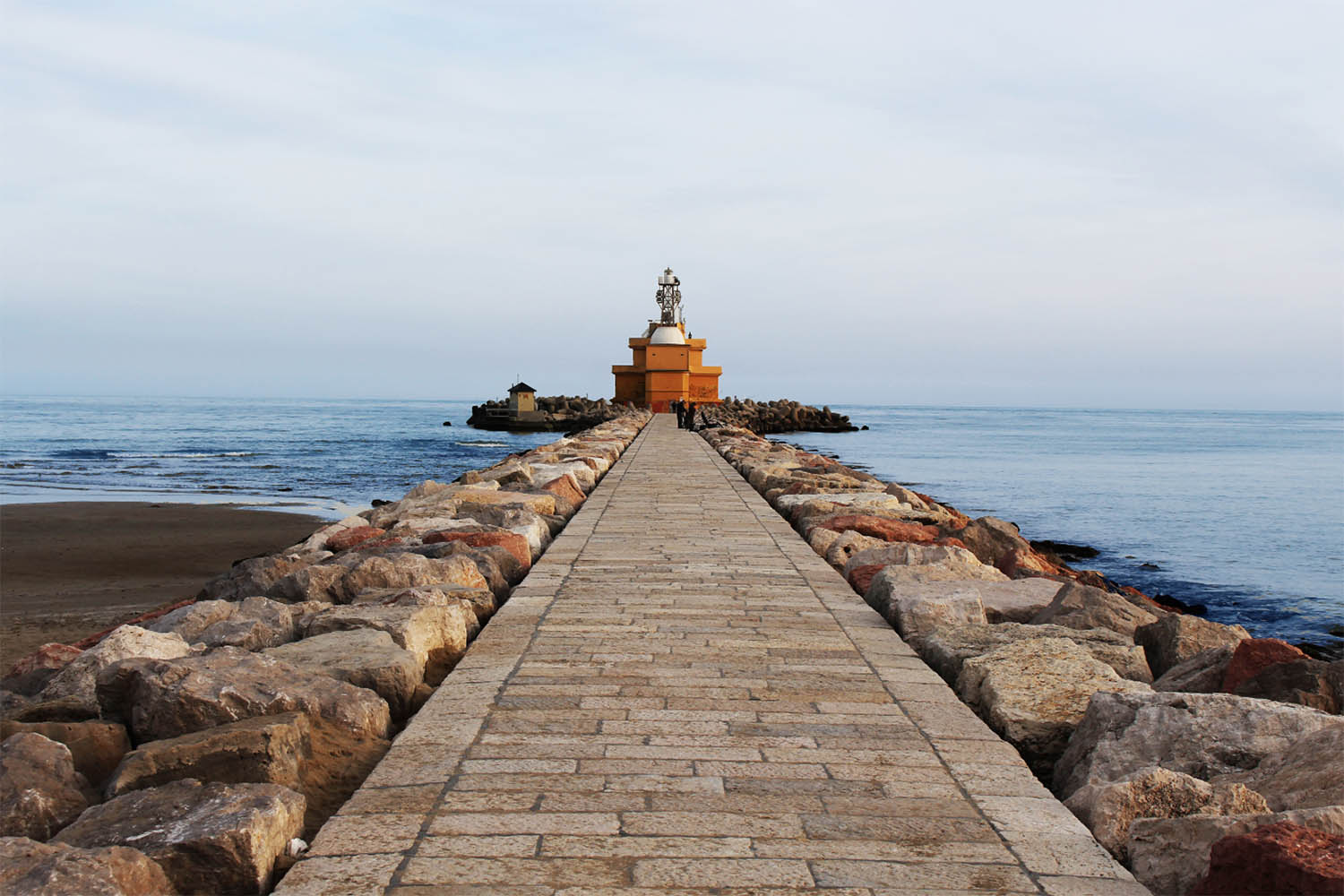 Nicknamed “Pagoda” for its shape, it’s at the west limit of Cavallino’s coastline, at the end of the dam delimiting Punta Sabbioni/Lido’s harbor. Painted in black and white cheques, on a 26-meter high structure. 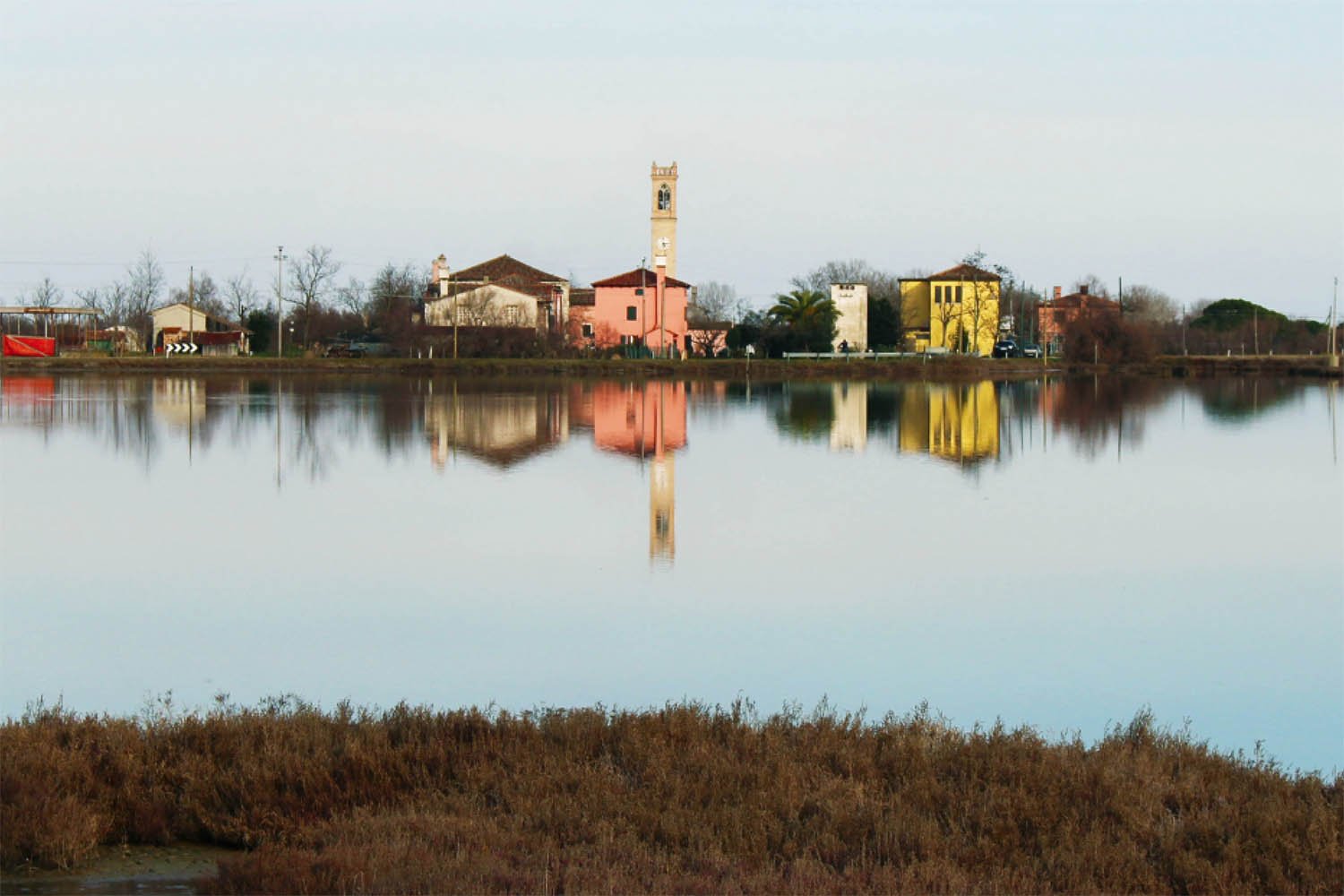 The town with the most ancient origins, it dates back to the roman imperial age. It is accessible from Treporti by a panoramic road. In the town square, it is possible to admire a beautiful country house from the eighteenth century, and the little church with its typical bell tower, consecrated to the Virgin Mary of the Snow. Here, the exquisite “castraure” (a type of artichokes) are farmed. 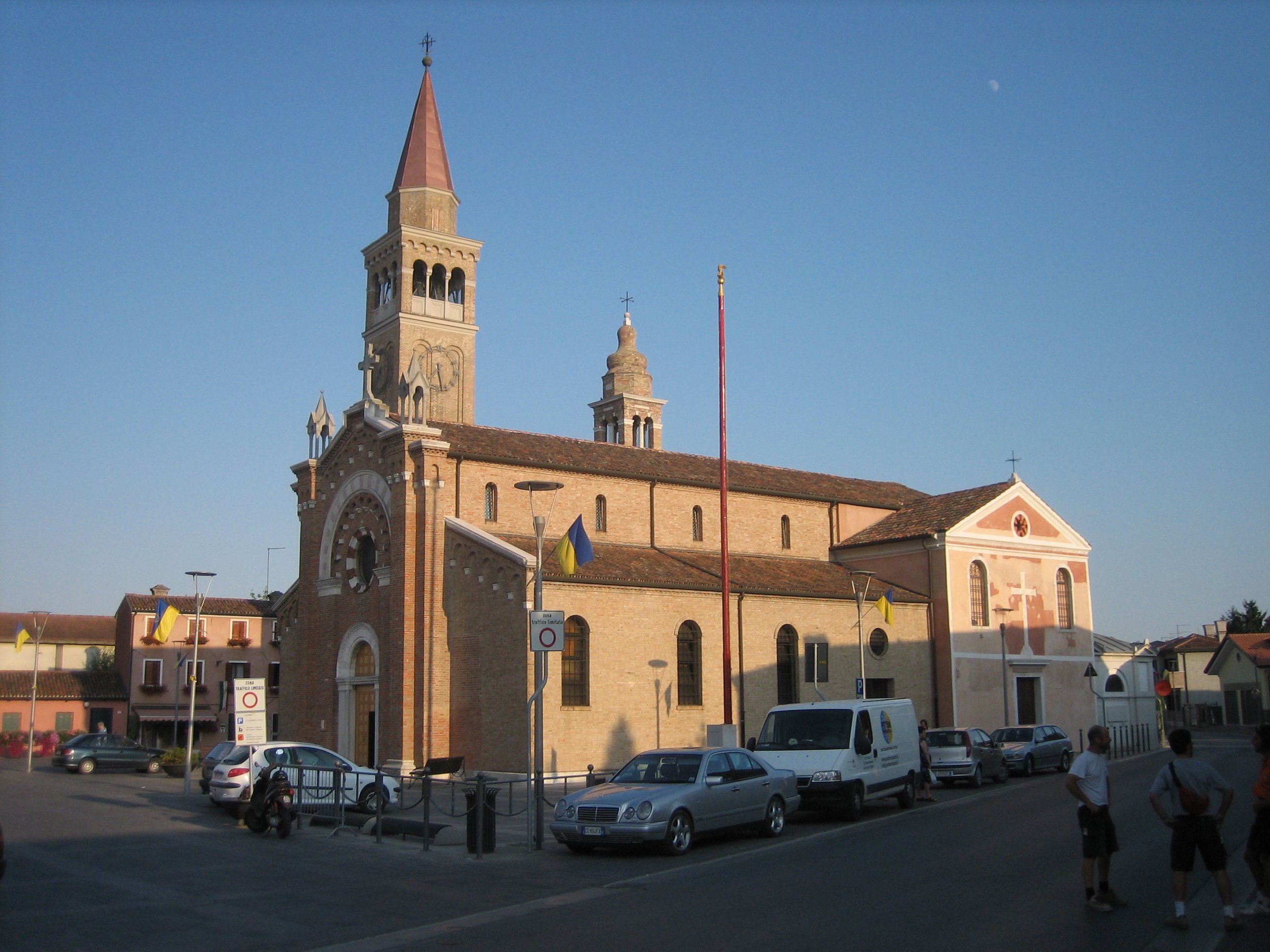 Linked to the coast by the bridge on the Pordelio canal, it is composed by the islands of Portosecco and of the Church. The beautiful town square is a must; in its center you can find the beautiful Church of the Holy Trinity, dating back to the 17th century. 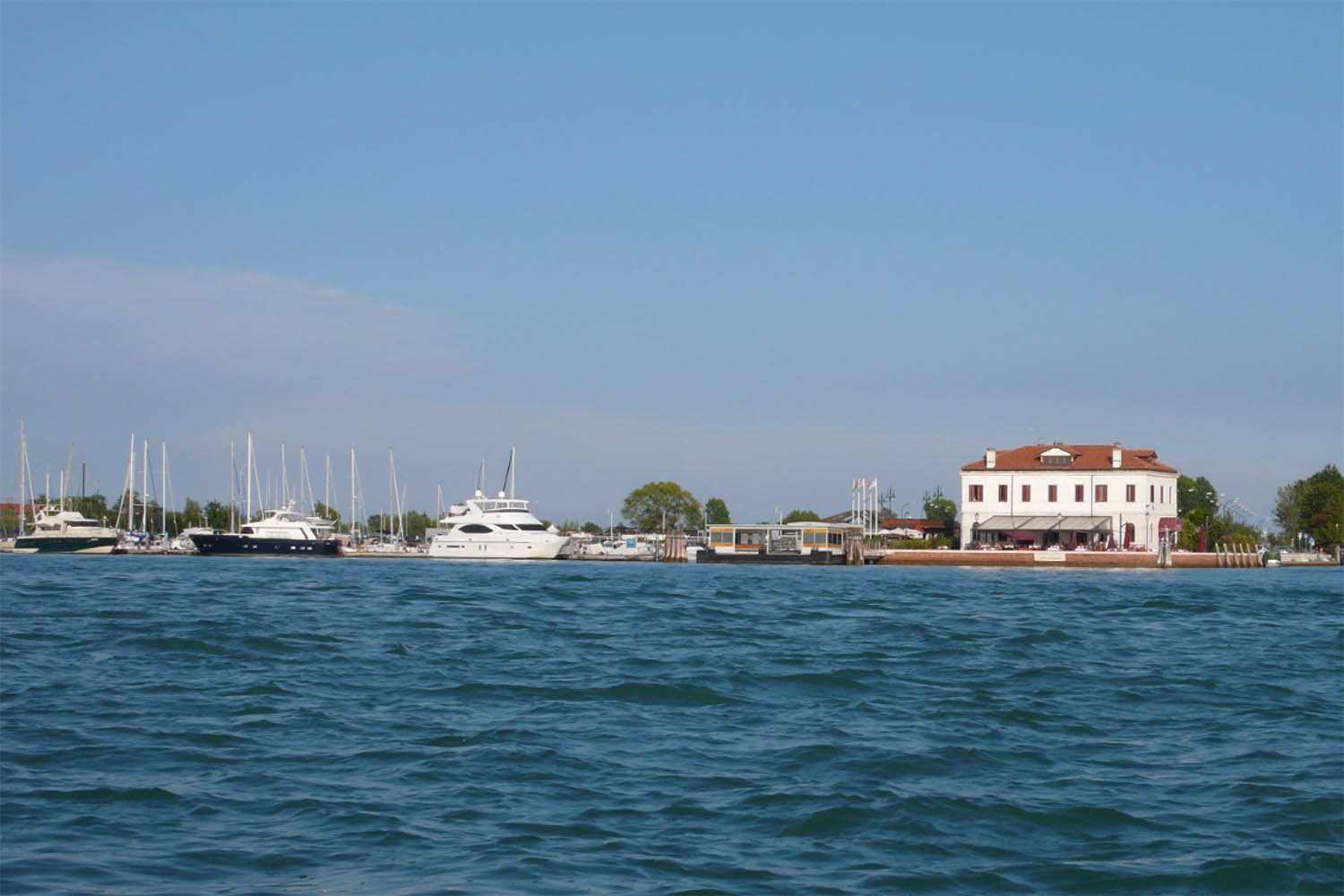 Delimiting the north border of the town territory, with the important water terminal from which the motorboats head to Treporti, it is located on the side of the old customs building, dating back to the 19th century. On the other hand, in the little square in Prà, you can admire the ancient Zanella country house, the Venetian renaissance villa erected in the 16th century. 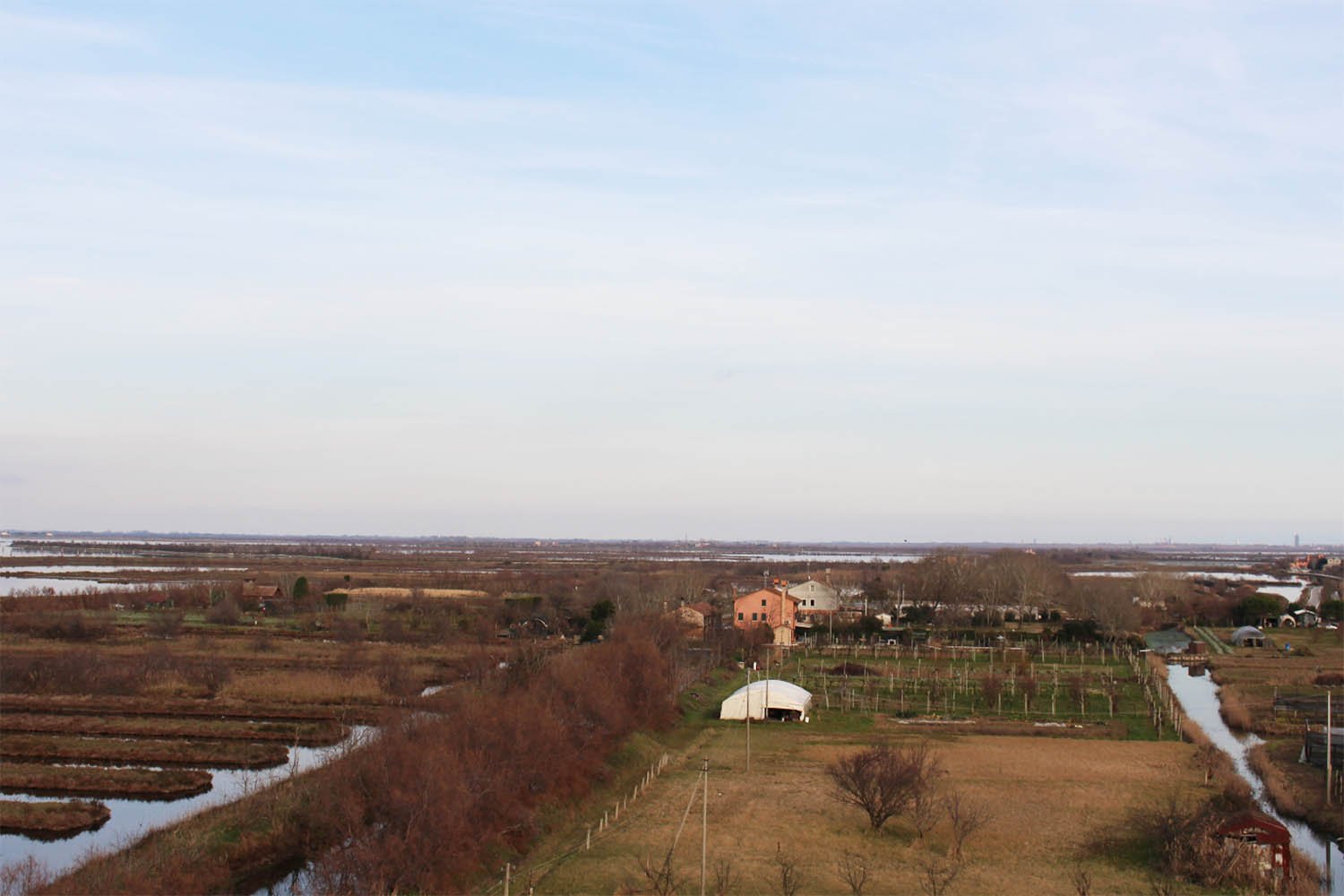 A thin strip of ground of ancient descent, which name derives from “Mensula”, “the middle island”, as it is placed between Lio Piccolo and the coast. It’s more recognizable building, the Cloister of the Mesole, dates back to the 14th century and seems to be referring to a monastery erected in 1380. 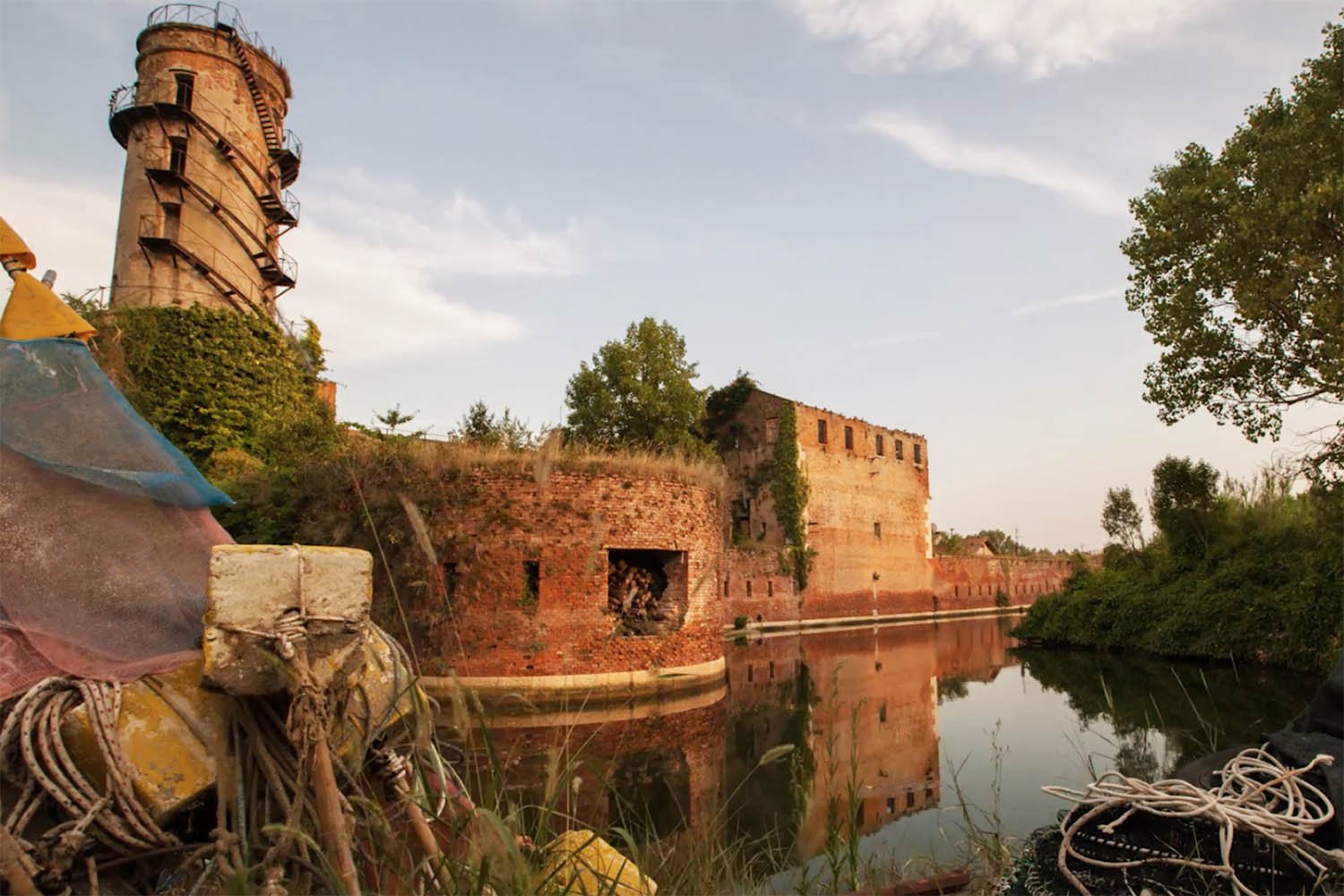 A fascinating building, it was constructed by the Austrians between 1845 1851 on the remains of another, preexisting French fort, representing for many years the most important defense of the Punta Sabbioni/Lido port, though it has been utilized as a logistic base, too, during WW1. 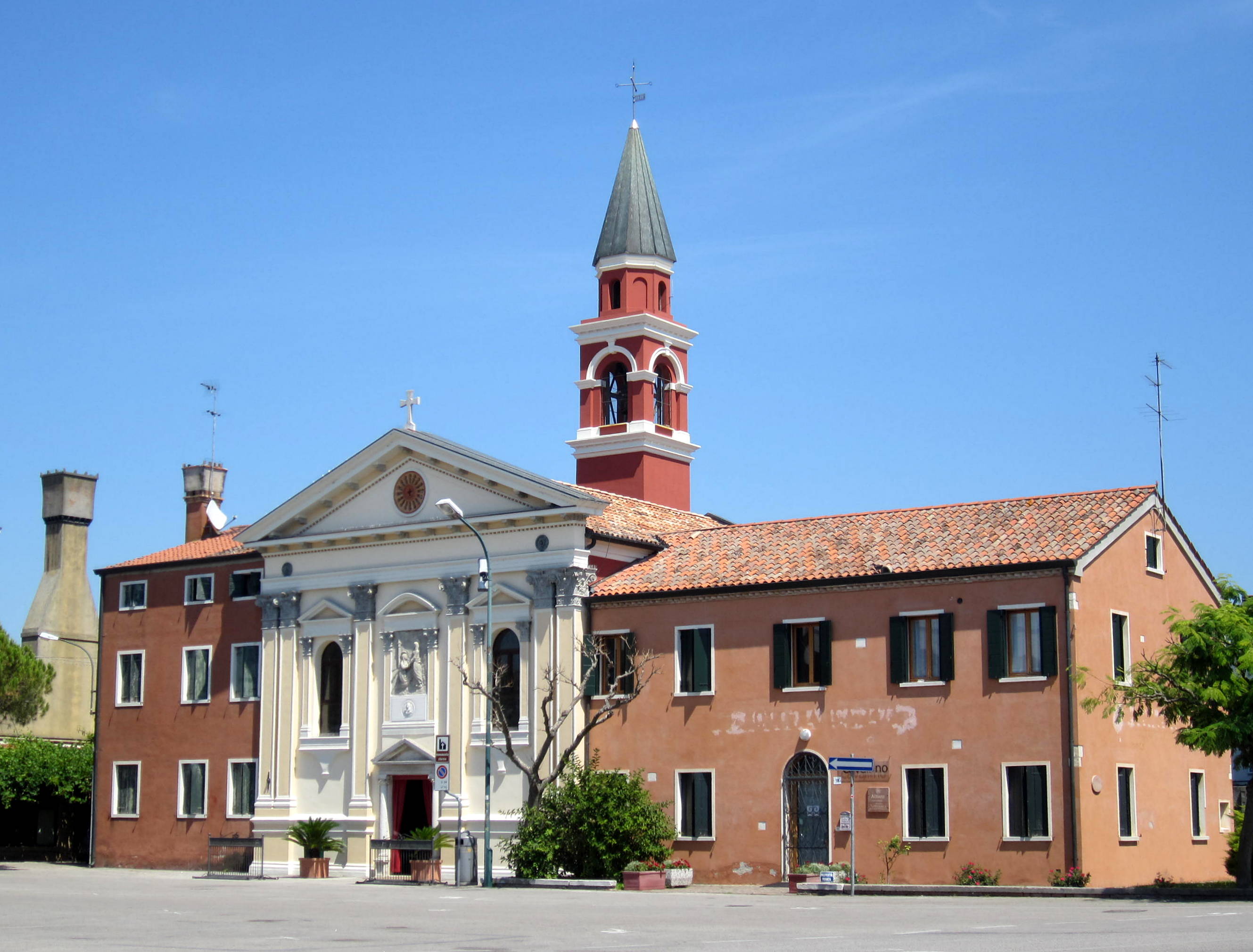 Being the oldest district, as it rose back in the 16th century, it names the coastline. The name derives from “Equilium” (which is Latin for horse), and was already inhabited during the Roman ages. In the beautiful Santa Maria Elisabetta square you can behold the ancient country palace of the 17th century, as well as the 19th century church, inside which you can find the historic Giacomo Bazzani pipe organ (1890). 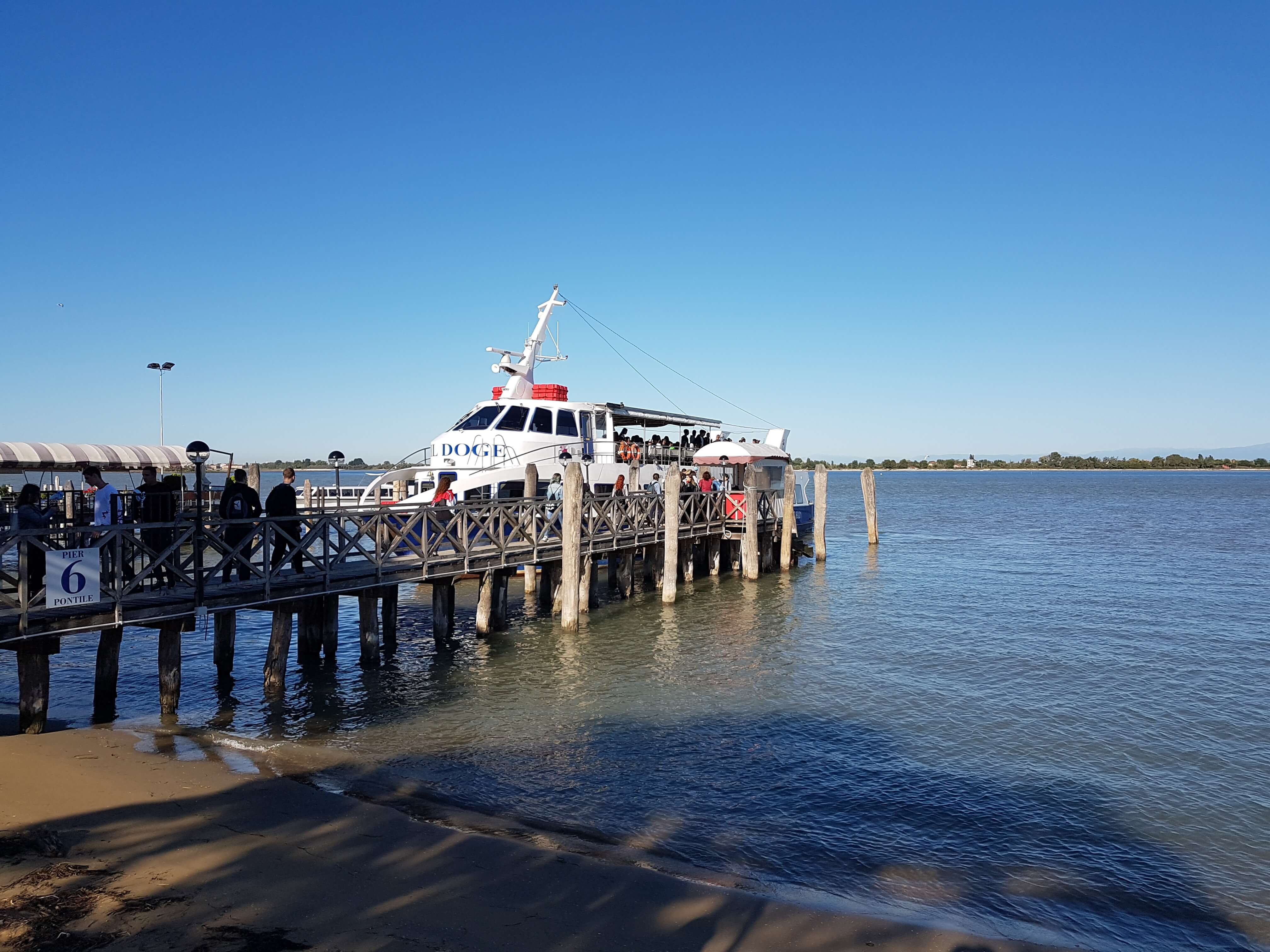 A good starting point for reaching Venice and the island of its Lagoon, it’s located on aterritory of recent formation, in the most part in the 20th century after the construction of the dam at the port. During the Great War, it hosted a seaplane hangar.

In order to get a closer look on the overall fortification system in Cavallino-Treporti, we refer you to the PDF file “Cavallino-Treporti in the Great War”, designed by Furio Lazzarini, which includes other historical buildings of great interest, like the Vettor Pisani and the Amalfi gun batteries. In fact, as incredible as it might seem, these very same waters were once crossed by massive battleships, and in this territory, the armies of the Entente clashed with the ones of the Central Powers. In the Venetian plane, the traces of this gigantic conflict have almost disappeared entirely, yet our coast still maintains the evidence of its wartime past well preserved, consisting of an entire system of forts, coastal gun batteries, barracks, armories, and range finding towers…