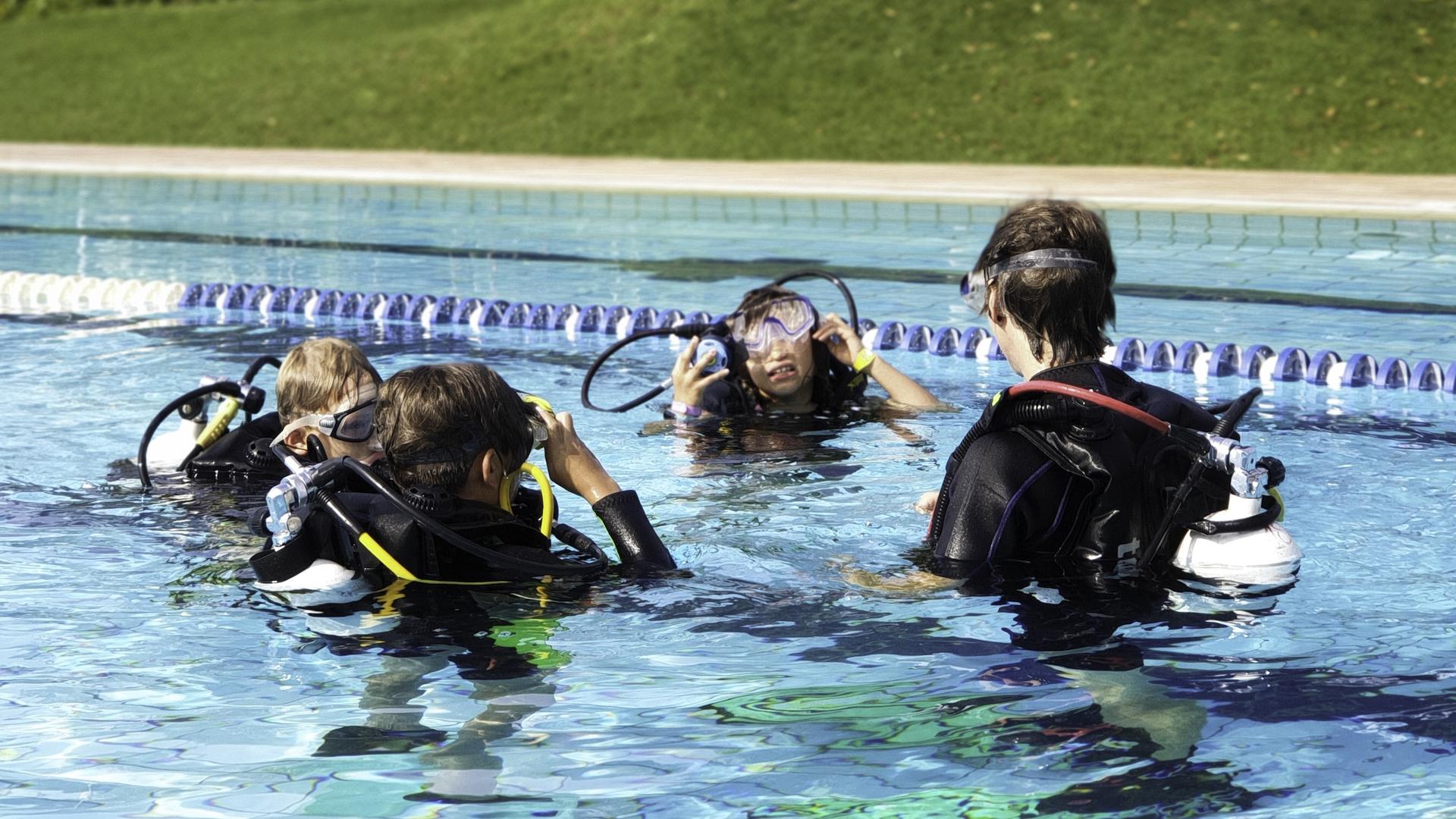 You can learn to dive and at the end of the course you will receive the international P.A.D.I. and WASE licence. There are deep-sea excursions as well as a range of diving equipment to suit all levels of experience.
The Adriatic Sea offers many interesting sites for diving, for both experienced and amateur divers.
The Union Lido Diving Center offers all types of excursions for different levels of experience, for example visiting shipwrecks or the Tegnue.
The Tegnue is a group of rocks, an oasis of biodiversity. Their name was given to them by fishermen who used to complain that the rocks caught and ruined their nets. It is a very rich ecosystem where thousands of tiny organisms can feed; it is also a natural site for the reproduction of numerous fish species. The experienced Federico Stella and his team are at your complete disposal to help you visit and discover this splendid underwater world.

We look forward to welcoming you to the Union Lido Diving Center near the Aqua Park Marino on the West side of the Amphitheatre, to give you all the information on our diving lessons and dives at sea.

“TEGNUE”
‘the hidden treasure of the Venetian gulf’


The Adriatic Sea is very particular, where oceanography, biology and geography all work together producing an environment that cannot be found anywhere else, and it is right here in the Gulf of Venice that it reaches the height of it’s complexity.
It is infact the last part of a long basin, where a great concentration of rivers flow into, where tides reach their highest, but where the depth is decisively low all the same: it only reaches 40 metres along the Istrian coastline and a maximum of 50 metres in the Venetian lagoon itself.

An anticlockwise circulation brings the limpid, poor and salty waters from the Mediterranean to go back up to the Albanian coastline and that of the Ex-Yugoslavia, right up until they lap the Istrian coast. Here they start to collect all the nutrients that are emptied into the sea by the population. The plankton start to find enough food and we can see the first algae flower, that from Triest , coming towards Venice and the south, consent the large breeding grounds for filtering shell fish such as mussels and clams, in water that is very rich in substance yet less limpid in colour.

We would like to specify that the un-transparent waters along our coastlines are due to the abundance of plankton, that breed thanks to the nutrients from the rivers.
Mother Nature has also given us the “TEGNUE”. They are a group of rocks, that have formed quite recently, in correspondence with the methane gas emissions, that have provoked the cementation of the sea bed.
These rocks have been called the “tegnue” by the local fishermen, because they used to catch and break their nets. They are dotted about just off our coastline, where their richness, the colours and the beauty of the various forms of life can make us forget that we are not in the Red Sea, or on one of the magnificent tropical barrier reefs around the world.

The richness of the plankton in the water, their oxygenation and the lack of sediment have potentialised the installation of a rich and wide range of constructive and encrusting oraganisms, that have helped build the reefs, with some that reach over a metre in height.
These rocks are also a chosen site for the reproduction of numerous species of fish. These rocks create luxurious ecosystems where constructive organisms are represented by encrusting algae and rare corals.

The tegnue have given us an abundance of shell fish and prestigious custaceans like the royal crab and in particolar, lobsters.
The light from an under water lantern will help us discover – also in daylight- this wide range of colours that cannot be seen elsewhere. Every rock can offer us a rainbow of life and colours, and the broken rocks host very large lobsters looking for protection.
The geographic position of the various tegnue and the different characteristics of the waters around each one (depth, light, material etc.) mean very important changes in the characteristics of the population around one group of rocks and another.

Noah Stella and his Team look forward to welcoming you to the Union Lido Diving Center, near the Aqua Park Marino on the West side of the Amphitheatre, to give you all the information on our diving lessons and dives at sea.

The departures for the diving sessions are directly from the Union Lido beach, with a motorized dinghy, so that the interesting diving areas can be reached quickly.
The submersions are programmed day by day, depending on the weather conditions and the level of expertise of the divers.

The Discover Scuba Diving programme is the first step to enter the underwater world.
It is a real baptism in the sea! You will take your first dive with a qualified instructor in complete safety.