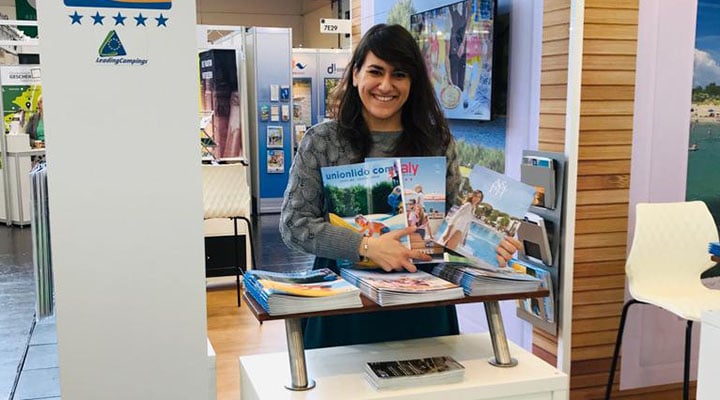 Unlike the persons we introduced to you before, Marica’s story at Union Lido has not lasted for so many decades as the others, in fact, she is only 30 years old. Why should we name her among those figures who are still improving to make Union Lido one of the most important campsites in Europe? Young people like Marica help us keep the tradition of the quality of services for our Guests alive.

2010 she started working at the reception for the summer season, while during winter she spent her days studying to graduate in foreign literature and languages. She studies German too which is, of course, helpful for her job.

Are you wondering which is Marica’s task? We cannot fix it either… It is quite difficult to find her in a fixed position or role: after her first summers at the reception she changed roles more than once, and today, after 11 years, she is still improving.

As mentioned before, she started working at the reception, she carried on Patrizia’s task at the Lodging Point and later became one of the Quality Office’s supervisors, one of Patrizia’s and Konrad’s previous roles. Moreover, since 2018 she is the Union Lido contact person for all the Tour Operators.

Have you ever sent a message or written a review on the web (Tripadvisor, Google, Facebook, or Instagram)? Most of the answers written in German are sent by her.

This description may seem enough to describe Marica’s qualities, but there is one last thing missing: her bond to the Union Lido flag is strong. She could not imagine herself with a different uniform working somewhere else and not in her beloved campsite. Marica has a spirit that fits the Marines’ one, her “Semper Fidelis” makes her one of the most loyal members of the Union Lido staff. Her surname already bears a strong meaning: if I had to struggle, Marica Guerra (which means “war”) would be the right one next to me!